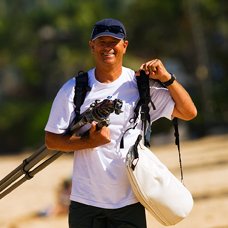 Tom Servais got hooked on surfing in the early 60’s as a 10 year old.  After completing a couple of years of junior college and still not knowing what he wanted to do career wise, he moved to California to surf, and never left.  Taking more classes in California, he found himself in a photography class that made his calling clear.  He soon landed a job at Surfer Magazine in 1977, and became one of their most widely published photographers. There aren’t too many surf destinations that Tom hasn’t been to; Hawaii, Fiji, Australia, Peru, South Africa, Europe, Alaska, Samoa, Indonesia, and New Zealand to name some.  His passion for photography and surfing remains strong, so expect to see a lot more of his work in the future.